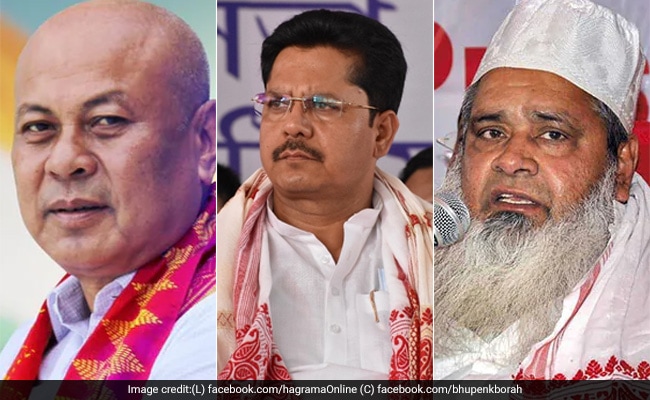 The Assam Congress has decided to sever ties with two of its key allies in the state with whom the party took on the BJP-led alliance in this year’s assembly polls. The much hyped 10-party ‘Mahajot’ is all set to collapse as the party’s state unit division writing to the high command to break the alliance with Lok Sabha MP Badruddin Ajmal led-AIUDF and Hagrama Mohilary’s Bodoland Peoples Front.

A core-committee meeting presided by Assam Congress President Bhupen Borah observed that alliance partner AIUDF’s “continuous praise” for the BJP and the Chief Minister has baffled the members of Congress.

“In this connection, after a long discussion, the Core Committee members of APCC (Assam Pradesh Congress Committee) unanimously decided that AIUDF can no longer remain an alliance partner of ‘Mahajot’ and in this regard will send intimation to AICC,” Ms Sharma said.

She also said that in the meeting, the discussion was also held about the alliance with BPF (Bodoland Peoples Front).

“Since BPF had already expressed their unwillingness in various forums to remain in the ‘Mahajot’, therefore the APCC President has been given full authority to take decision on this matter and intimate the High Command,” Ms Sharma said.

Lok Sabha MP Gaurav Gogoi had just days ago said the Congress must no longer be a part of the alliance and instead, he said, must remain independent and focus on growing stronger at the grassroots.

“When the Congress was in the Mahajot and had to leave several seats for our allies, many grassroots workers were disheartened. So, it is time that the party listens to the aspirations and sentiments of the party workers and free itself from the grand alliance,” he added.

The main opposition Congress managed 29 seats in the March-April elections, three seats more than 2016 polls. The AIUDF won 16 seats up from 13 last time while BPF got four seats against 12 in previous polls and the CPM won just one seat.

Reacting to the Congress statement to cut ties, the AIUDF has also issued a press statement saying that the decision is “unfortunate”. The AIUDF also stated that the ‘Mahajot’ was an alliance of all secular political parties of Assam and the Congress has taken a ‘one-sided’ decision to break the alliance.

Earlier this year, the Congress had forged the ‘Mahajot’ with several parties including its arch enemy, AIUDF and its estranged ally BPF, ahead of the assembly elections.