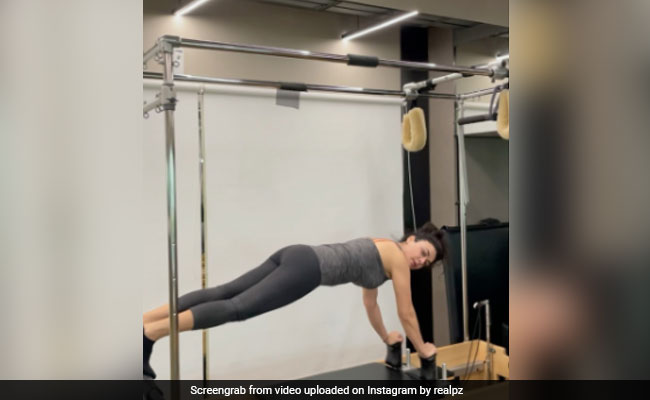 Preity Zinta in a still from the video. (courtesy realpz)

We are impressed, Preity Zinta. The actress, who returned from her recent Ladakh vacation, hit the gym and did some Pilates. She shared a video of her intense workout routine on her Instagram profile on Monday and we can’t help but feel inspired. The actress posted a video on the photograph sharing application, in which she can be seen doing some Pilates with utmost ease as the popular track Manibe Magehithe plays in the background. “Back to Pilates with Yas,” she captioned the video. The comments section of her post was filled up with heart emojis from her Instafam.

Preity Zinta has managed to set major fitness goals for her Instafam on several occasions. Check out some of the posts here, you can thank us later:

Preity Zinta often shares videos and pictures of her homegrown produce. She recently shared a video of her Apple orchard in Himachal Pradesh. She also shared pictures from her kitchen garden there:

See the posts shared by the actress here:

The actress got married to Gene Goodenough in 2016 and she moved to Los Angeles. However, she keeps visiting India. Preity Zinta is best known for her performances in films such as Dil Se, Lakshya, Salaam Namaste, Kal Ho Na Ho, Veer-Zaara and Dil Chahta Hai among many others. Preity Zinta was last seen in Bhaiaji Superhit, which released in 2018. She also featured in a small role in ABC series Fresh Off The Boat in one episode.