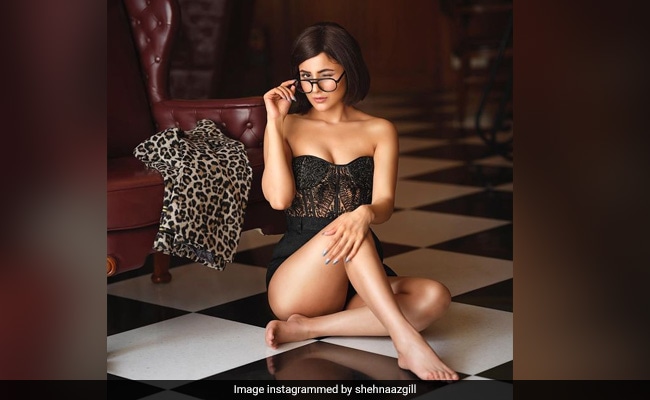 Former Bigg Boss contestant Shehnaaz Gill occupied a spot on the list of trends on Tuesday morning after she shared a set of pictures from her recent photoshoot on social media. The pictures that are trending a great deal on Instagram, were clicked by ace photographer Dabboo Ratnani. For the shoot, Shehnaaz picked a black lace corset, which she paired with black shorts, from the shelves of Rocky Star. She accessorised the look with oversized glasses and she can be seen sporting a bob hairdo. Her swag was off the charts. The comments section of her post was filled up with fire emojis. “With some stories, you really can’t rush things. And it’s often best just to sit back and enjoy the journey for what it is,” she captioned the post.

Shehnaaz Gill, who frequently appears as a guest on TV reality shows, trended big time for her catchphrase “Twada Kutta Tommy, an expression she used during her stay in the Bigg Boss 13 house. Later, YouTuber and musician Yashraj Mukhate added a spin to it and made it into a catchy track of sorts and it became insanely viral. That’s not it. Deepika Padukone and Ranveer Singh too shared a video, which was set to the viral “Twada Kutta Tommy” mix. ICYMI, this is what we are talking about:

Shehnaaz Gill has featured in several Punjabi music videos and films such as Kala Shah Kala and Daaka. She was one of the finalists in the reality show Bigg Boss 13. She has also featured in music videos like Shona Shona and Bhula Dunga, opposite Bigg Boss 13 winner Sidharth Shukla. She also starred in a music video with rapper Badhshah. The singer-actress will be seen in a Punjabi film titled Honsla Rakh alongside Diljit Dosanjh and Sonam Bajwa.