‘What the Paralympics really mean’ 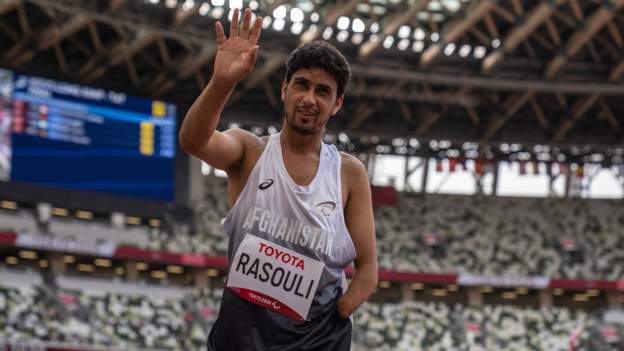 Afghanistan evacuee Hossain Rasouli finally got his chance to compete at the Tokyo Paralympics – and his opponents “couldn’t help but feel joy” as he lined up alongside them.

Rasouli was one of two Afghan athletes to be safely evacuated last week in a “major global operation”.

They had been among thousands of people unable to leave Afghanistan after the Taliban seized power.

The 26-year-old finished last in the T47 long jump final.

He had arrived in Tokyo on Sunday, too late to compete in his favoured 100m event.

American Roderick Townsend, who won long jump silver, didn’t know Rasouli would be competing until he saw 13 names on the start list, instead of 12.

“I saw his name on there. With everything going on right now I couldn’t help but to feel joy for him,” said Townsend.

“We get so caught up in our personal lives, and I am here complaining about a silver medal and [yet] we have somebody making their way across the world to be able to do something we all love to do.

“That says so much about what the Paralympic Games really means and what it stands for.”

Rasouli had his left hand amputated after a mine explosion.

His compatriot, Zakia Khudadadi, 23, will be the first woman ever to represent Afghanistan at the Paralympics when she competes on Thursday in the women’s K44 taekwondo -49kg weight category.